The winning script titled Breaking Walls seeks to forge a way forward for greater East African cultural integration by initiating conversation among strangers on the bus bound for Dar-es-salaam.

UYE is a community based organisation which was formed in 2010. It comprises youth who have been trained by visiting film makers affiliated to Hypoheals a Spanish association involved in education and cooperation. Others are from Concordia Volunteer Abroad Programme from Canada and Maisha Film Lab from Kampala. 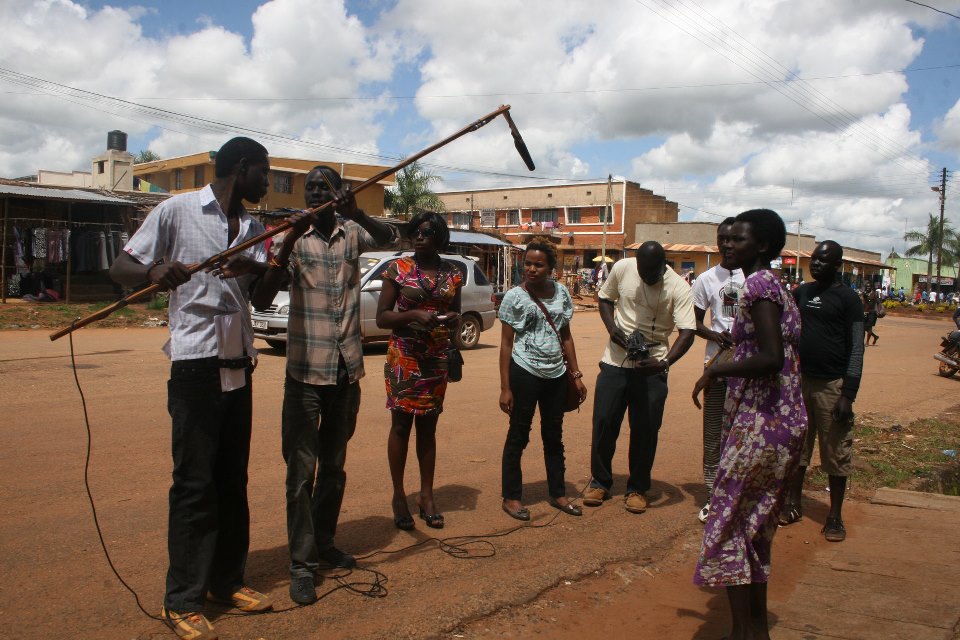 Gulu Films on set for A Girl from Lamwo.

Without any external investment, UYE has managed to produce more than five low budget short films in the last two years. Onen Martin who is the chairman of the organisation said, “Our films can be used to educate and entertain the community. The only problem is that we lack funds to produce feature films, but if we could get funding then we would make Uganda proud.”

When contacted via phone, Mary Bwabye who has been a film producer and mentor at Maisha Film Lab congratulated UYE. She was delighted and optimistic that this showed positive growth in the local film industry. “The film industry is surely growing, the gaps are there to be filled and the future is bright if we work hard.” Ms Bwabye said.

It is because of the collaborative efforts of members that short films like Paranormal Dreams, A Wife for Hire, and Haunted Christmas were released among several other projects still in the pipeline. The young film makers shall represent Uganda with their script Breaking Walls.

The story for Breaking Walls was provided by Awor Christine, written by Omagor Joseph L’Emurot, and the script was edited by film director Komakech Daniel. Their success has been more enjoyable because of the closeness of their friendship.

This year ZIFF introduced a special short story script writing competition in addition to their regular festival repertoire. In this category, script writers each submitted a 10 to 15 minute script for consideration by the judges.

One winner was chosen from each of the five East African countries; Uganda, Tanzania, Kenya, Rwanda and Burundi. The winners will attend the ZIFF script writing training in Zanzibar between 29thJune and 9thJuly 2013 under the tutorship of renowned Nigerian film maker Femi Layode. After the training workshop, one script will be reworked and filmed. The winning script writer will walk away with a $1000 cash prize.

United Youth Entertainment received the good news on 12th June 2013 via e-mail. And one representative has been invited to Zanzibar.

Twenty six year old Komakech Daniel will be representing Uganda at the ZIFF workshop. Mr Komakech who was in Kampala finalising his travel arrangements, said over the phone, “I feel good travelling out of Gulu to represent my country. It is a great honour.”

On being asked how she felt about the news, Ms Awor said, “We had given up hope, because it was stated that winners would be contacted within two weeks. This has caught us by surprise and we are literally on cloud nine.”

This is a first for young film makers based in Northern Uganda. Is Uganda experiencing a surge in competition in the film arena?

Ms Bwabye believes it is an optimistic time. “The future is bright and the industry is definitely going to experience some competition.” she says.

While this question needs a few more years to be answered fully, for now let’s join Gulu in jubilation. Let’s wish them well in shaping film in the region. Hopefully they can also bring home the dollars.

7 thoughts on “On the Winning Path”