Latin Flavor Uganda is a local dance ensemble that welcomes professional as well as amateur dancers. Their last show, The Martyr, was a dramatic account of the outbreak of the ebola epidemic in Northern Uganda in 2000. The show which was held on June 26th at the National Theatre also included video clips of the Fania All-Stars during their maiden trip to Kinshasa in 1974.

Sam Ibanda, the founder of Latin Flavor Uganda started dancing in secondary school. But when he mentioned dancing as a profession to his father, he was met with protests. “I stayed on the streets for two months because of that,” said Sam. He tried many dance styles and finally settled on Latin dancing because it brought the genders together in a unique way. “It’s been seven years since we started this. Over that time we’ve refined our aims and goals to use dance in very different ways to create understanding.”

Since its inception in 2006, Latin Flavor Uganda has been attracting a diversity of dance enthusiasts. Vivienne Lütteken came to Uganda from Germany in 2012. She then joined Social Sunday. “There is a class, after which we all dance together,” she says.
Social Sunday is free in The Hut at the National Theatre every Sunday. “We are always happy to see new faces,” says Vivienne. 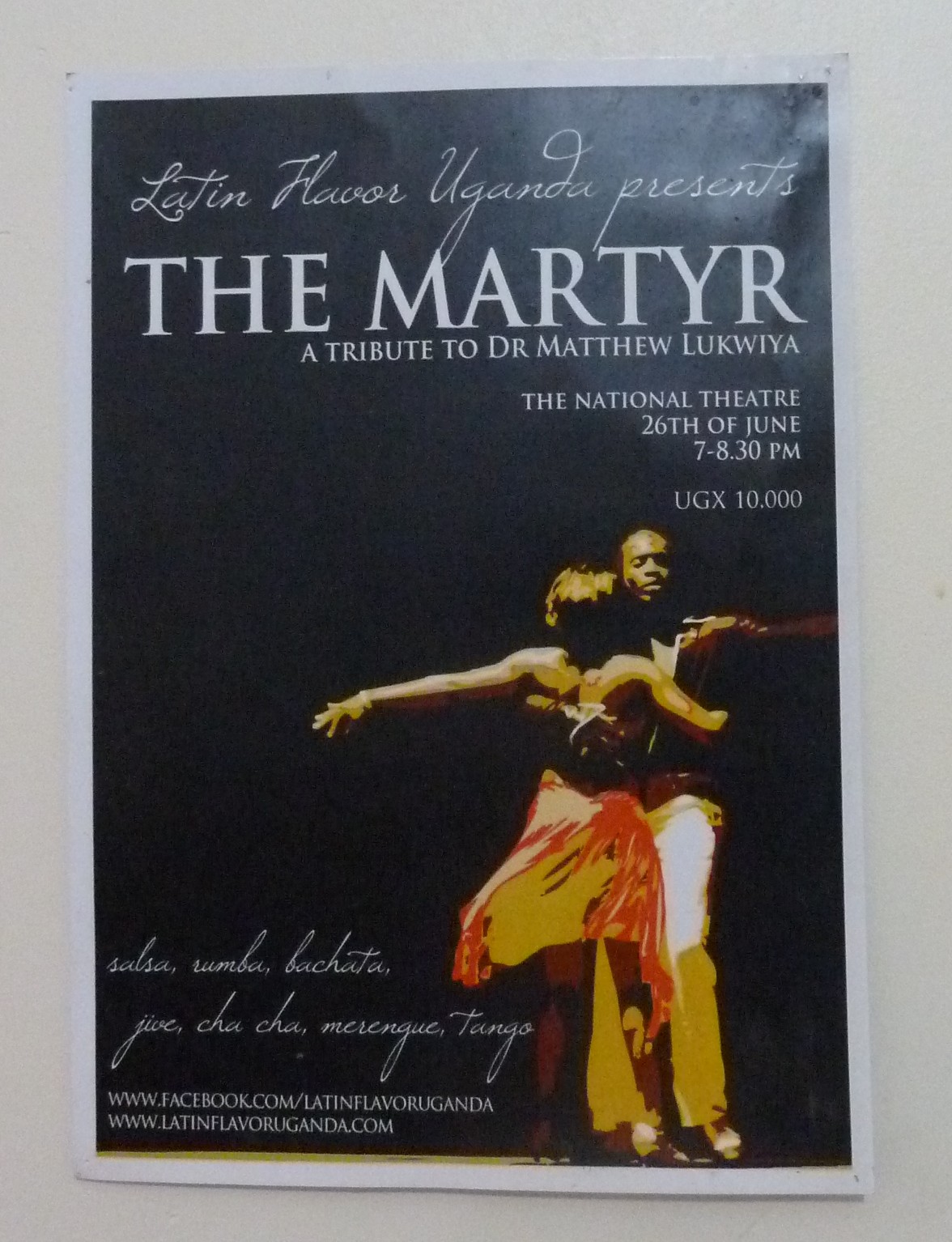 Sheikh Hameed was one of these new faces. He had been to a show three months earlier when he contacted Mr Ibanda and Ms Upoki, the principle dancers. He expressed gratitude for their patience while he did what he enjoyed. “I joined the classes and later they asked me to perform with them.”

In the opening scenes, Mr. Hameed plays a school teacher with naughty students. The dancers took the audience through a series of sensuous scenesetting. Ms Upoki, playing a seductress, had a strong natural sensuality that made her dancing sparkle in the banality of the unadorned stage.

Dancing the Dingi-Dingi, a traditional Acholi courtship dance, placed the action within the context of Northern Uganda. It was danced to Ajolina, a popular love song by DJ Languna, and blended neatly with Latin dance steps. This seamless transformation enabled a common song and dance to be expressed in a new light.

The Martyr included sound effects and narration which reinforced the suicidal mission of the protagonist. This however could have been more effective if the narration were not generously spiced with comic bombast and atrocious grammar. Lighting was effectively utilised, with the stage bathed in harsh red, heightening a sense of danger, and the suicidal mission of the doctors and nurses.

When Dr. Lukwiya made a desperate phone call to Kampala on 8th October morale was low at Lacor as the death toll continued to rise. It is reported that at the funeral of an Italian nun on 7 November 2000, he exhorted his colleagues to be courageous saying:

“It is our vocation to save life. It involves risk, but when we serve with love, that is when the risk does not matter so much. When we believe our mission is to save lives, we have got to do our work.”
Hardly a month later, he too succumbed to Ebola.

The martyr was a comfortingly human perspective on a topic mostly thought of in connection with quaint religious reverence. After all June 3rd and 9th are Martyrs day and Heroes’ day respectively. Most of Uganda’s religious Martyrs lost their lives due to being caught up in religious and political clashes during the advent of Christianity and ultimately colonialism. Both were perceived as alien infractions on culture and deeply held traditions.

“We thought that since this was a month that had both Heroes Day and Martyrs Day, we would look for contemporary examples of a martyr. Everyone is used to the idea that a martyr is someone who has died because of their faith. So we did some research and Sam came up with Dr. Lukwiya,” says Barbra Upoki, the lead female dancer.

The drama was a crucial reminder of how the solidarity of a team of doctors and nurses at Lacor Hospital saved thousands of lives. Initially phone calls to Kampala requesting emergency relief fell on ears that were either reluctant or unwilling to deal sufficiently with an epidemic of very scary proportions. From this angle it is clearer to see the plight of a man who sacrificed everything, including his own life, to save possibly thousands admitted to Lacor Hospital with ebola.

Ultimately The Martyr, though set in very very dire circumstances, was a tale of hope. It left impressions of the kind of valiant struggles that individuals endure for a more socially just society. Whether they challenge institutional weaknesses, or collective slumber, it becomes increasingly clear that when individuals are forced take personal responsibility for the well being of communities, a tragedy is usually at hand.

Unfortunately the character of Dr. Lukwiya was not clearly defined and brought to life. There was a character that looked poorly, but we can’t really be sure whether that was the good doctor or not. Any actor in full costume could have taken up the role and played it aptly. It also seems that major existential conflicts were lost in the theatrics.
“About nurses striking and that stuff, I didn’t get it,” says Nalwadda Tina, a member of the audience.

Other people were just grateful for the tribute. “The show was able to awaken a humanitarian part of me. I asked myself many questions and concluded that someone should be willing to die for something, or else you yourself are not worth living for actually,” says Pejo Alice.

The vintage library of Alain Cacheaux offered up gems from a bygone era. Its heady music mix and montage showed a tortured long distance romance between Afro-Latin music and it’s enthusiasts across the seas. “I found these amazing DVDs in a club in Bogota Colombia,” said Cacheaux. A French man with an affinity for salsa, he lent some of his DVDs to his friends in LFU.

One album, tilted Fania All-Stars Live in Africa, was shot in Kinshasa in 1974 at the Stade du Hai. The star attractions were the salsa legends Johnny Pacheco and Celia Cruz. LFU used these DVDs to hone their skills.

Igor Alberto Markov, a Venezuelan in the audience says, “That was a nice homage to the man.” In his view the dancers nailed the meregue and the bachata. “This is the second show that I’ve been to, it was not excellent, but an improvement on the last one,” Markov says.

Sheikh Hameed was a delightful presence on a stage that hardly ever hosts Indian performers. His lithe long limbs flexed with awkward abandon. “I’m not a professional dancer. This is my passion. I’m doing it because of my love for dancing,” says Hameed.

Dennis Ssekamaanya, a seasoned dancer says that dance has been a bonding experience, “The Indian Association has been a big supporter of our dance. They constitute a big proportion of our audience. ”

As life imitates art, perhaps the barriers that have kept Ugandan communities at a cold distance are showing cracks. It evokes Ngugi Wa Thiongo’s Weep Not, Child, in which the younger generation is set apart from their bloody minded, and unfortunately long suffering parents.

“The children are a new order, unsustained by their parent’s iniquities. They understand and love one another,” comments Taban Lo Liyong in The Last Word (1969). Colonial oppression had enabled explosive asymmetries of wealth and power between the local population on one hand, and enviable privilege within the settler communities of Asians and Europeans on the other.

Mr. Ibanda also reckons that, “If I dance with you, I’m not gonna fight with you.”

Dr. Lukwiya would have given his approval. Whether negotiating for the safe return of kidnapped nurses, or appealing to the warring parties to find a peaceful resolution to the war in Northern Uganda, Dr. Lukwiya always advocated for peaceful solutions.

One little detail that was conspicuously missing was the preexisting civil war and economic distress that had nearly broken communities in Acholiland. Perhaps in missing this little detail, it only reinforced long held perceptions of marginalisation and their contribution to the making of local heroes. These public figures sought to alleviate suffering in the absence of effective government intervention.

Health policies were unwittingly exposed. Perversely, it seemed easy for the dancers to access costumes yet many health workers are frustrated at finding it difficult to access the same life saving supplies. The role of non governmental organisations was also put in the spotlight. Usually their well meaning interventions carry unintended consequences such as creating the kind of aid dependency that makes governments renege on their duties to their citizens.

Costumes were sourced courtesy of Mulago National Referral Hospital. According to Sam, the prevailing outlook at Mulago is not pleasant. “Abbalwadde bali ku luguddo,” he said. The sick are lying by the roadside. But he believes that, “Culture dance and entertainment can be used in many ways to foster peace, communicate and educate.”

LFU has previously worked with Breakdance Project Uganda to reach out to communities that are under served.

Vivian travelled to Gulu on a fact finding mission, “There is a nurse at Lacor Hospital who was working with Dr. Matthew Lukwiya, they were interested in our idea,” she adds, “Maybe one time we can do a show in Gulu.”

The Martyr was a mirror for our contemporary realities. It confirmed that people from diverse backgrounds are eager for meaningful cross-cultural exchange. They weave new bonds where there were non before, creating the kind of human agency which enables the evolution of richer cultural experiences.

In the end it was a mosaic of inventiveness and lively dramatics. Certainly those years of grief and bleakness have a bright spot in the spirit of Dr. Lukwiya.