Rashida Namulondo has won the fifth Beverley Nambozo Poetry Award for 2013 with her poem, Time.The award ceremony was held in House of Biriyani in Kampala on Friday, 28 June 2013. The colorful event was attended by writers and literary enthusiasts, and spiced with a spot of fundraising, poetry and music performances. The guest of honour was Hon. Florence Kabahenda, who stood in on behalf of the patron of the BNP Award, Rt. Hon. Speaker of the Parliament of Uganda Rebecca Kadaga. 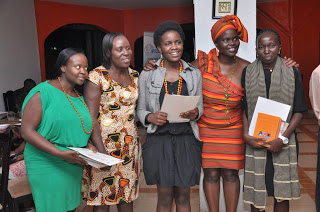 Rashida Namulondo won a cash prize of 500 US Dollars, a fully sponsored trip to the Storymoja Hay Festival in Nairobi, Kenya alongside autographed copies of Home Floats in the Distance / Zuhause Treibt in der Ferne by Dr. Susan Kiguli, Diaries of a Dead African by Chuma Nwokolo, Jr., Songs of Paradise by Justice James Ogoola and Tropical Fish by Doreen Baingana.

Ms Namulondo recently graduated in Food Science and Human Nutrition from the Islamic University in Uganda. She is also an actress, mentor and life skills coach specialising in self discovery and empowerment, goal setting, public speaking and assertiveness.

Ms Namulondo says that she started writing in Senior Three. “Writing to me is a way I can reach out to people by letting them know what I feel and see. I know some one can learn, relate to, and feel they have a friend from my poems,” she says. “I usually prefer performing my poems. I started doing that last year.”

She also thinks that that her latest achievement has rejuvenated her efforts. She hopes to pay the benefits from the award forward. “I intend to use it in a project I’m running called Art 4 Change which uses poetry writing as a tool for self discovery and empowerment,” she says.

In second place was Pamela Orogot with her poem, A Face like Mine. While in third place was Clemence Taremwa with her poem Innovation. Both poets won cash prizes, a fully sponsored trip to the Storymoja Hay Festival in Nairobi, Kenya and autographed books.

Pamela Orogot says that she is fascinated by women, the human condition and her family.

“I come from a large family of mainly women. Besides my dad and two brothers, there are eight of us,” Ms Orogot says.

“My elder sister is a social worker. She rescues children that have been abandoned in ditches and rubbish piles and takes them to Malaika Babies Home. So I wondered, ‘What happens to the baby who is not picked up?’”

A Face Like Mine attempts to chart the progress of such a baby’s life. Though quite melancholy, it eventually becomes an ode to hope.

The third winner was twenty eight year old Taremwa Clemence, who was born in Kabale. She studied Bachelor of Science in Statistics and Mathematics. Currently, she is a Data Analyst at the National Social Security Fund Uganda.

Innovation was very whimsical and full of humour but Ms Taremwa asserts that, “There is no particular story behind my poem. I am just full of humour. I can’t say 10 sentences without people laughing. I hope to join comedy one day.”

Ms Taremwa was positively impressed by the BNP award. “It’s a great opportunity. I don’t know of any other in Uganda. Poetry is appreciated by quite a few us of today. I loved the idea; I’m glad I got to know about it and participate,” she says.

She adds that she did not focus on winning, although she wasn’t surprised. “I have a great intuition. When I am going to lose or win anything, if I focus on it I always know beforehand. So this time I tried not to focus on the thought. But I had a feeling I would win, yeah! I have a very high intuition.”

Previosuly Ms Taremwa has written for The Notice, The Daily Monitor, Observer and New Vision. As dreams go, Ms Taremwa says, “I hope to one day work in a big international media company, with a big scientific project. I am a geek.”

According to Ms Nambozo, the most suitable theme of the poetry competition was innovation because, “2013 is about originality, modernization, freshness.”

BN Poetry award is the first of it’s kind in Uganda. It was founded by Beverley Nambozo Nsengiyunva in 2008. Nambozo is a Ugandan poet, who is passionate about poetry and saw the need to promote upcoming Ugandan female poets. “The Award stems from a strong belief that women have some of the greatest potentials that go unnoticed and unrecognized,” Nambozo says.

David Kaiza, Advisor to Stichting Doen was in attendance and says of the award, “It opened the floodgates to the repressed parts of people’s lives.”

Early this year, the award changed its name from Beverley Nambozo Poetry Award to Babishai Niwe, meaning creating with you. “Babishai is part of the Hebrew name Abishai. I added the ‘B’ as a new creation incorporating a common prefix in Bantu languages to maintain BN. Niwe means ‘with you’ in Runyakitara. Hence, creating with you,” says Nambozo.

Mr Kaiza, described the BNP Award as tremendous and praised the energy and brilliance shown in it’s growth. He also commended the synergy of people who have supported the award through the years. He says, “Symbolically, having a personality like Justice Ogoola read his poetry is more than a stamp of approval. It is a visa that gives people with talent access to recognition.”

Next year, the award will be opened to the rest of Africa. The BN Foundation will collaborate with literary partners in Africa and the Diaspora to hold annual regional poetry awards for both men and women. Regular training sessions will be conducted in creative literary arts and an anthology of poetry from Africa will be published in 2013, and distributed widely.

The new changes were welcomed by members of the public. Mr. Kaiza says, “The direction Beverley has taken has put Uganda on the African literary map.”

Over the years, the judges have been Dr. Susan Kiguli, author of two widely acclaimed poetry collections and head of Literature Department at Makerere University, Iga Zinunula, a poet and entrepreneur, Apuuli Mugasa, head of the Literature Association of Uganda and author of Pulse of the Pearl and Mildred Kiconco Barya, author of widely acclaimed poetry collections Men Love Chocolates But they Don’t Say and Give Me Room to Move My Feet.