Restaurants can be sources of pleasant surprises.

The atmosphere is laid back and friendly. Each area has a different theme. The decor is eco friendly and jazzy, with murals on the walls, papyrus finishings, grass thatch, colourful cushions and bright mats on the floors. It’s open, it’s airy, yet there is also a sense of privacy. The reed screening at the front keeps diners hidden away from passersby outside, while the mesh curtains can be easily rolled back for more air and light. 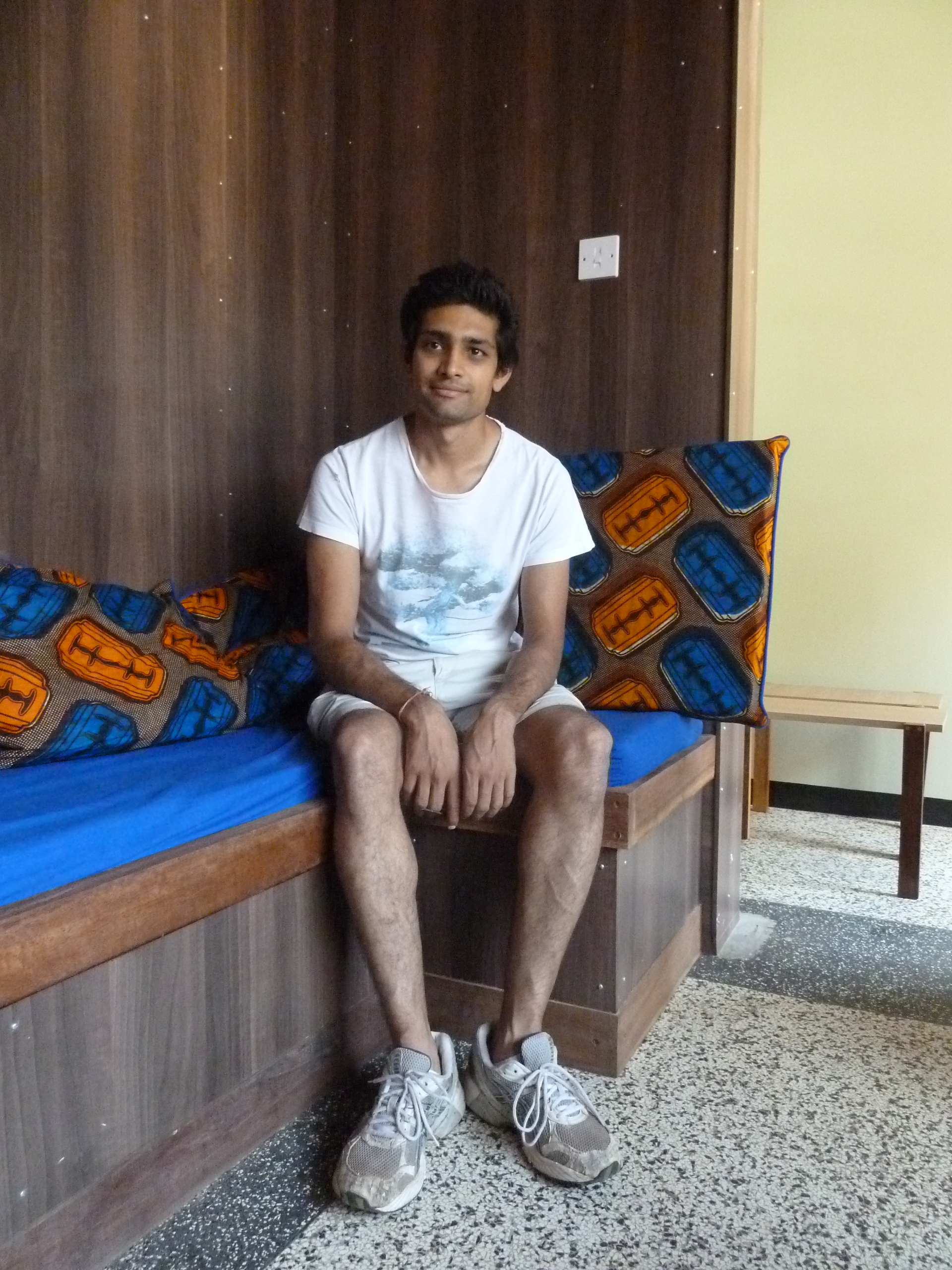 Dr Kaval Patel is an Orthodontist and together with his mother, Ms Manda Patel, own and manage Buzz Bar and Restaurant as a little home away from home where everyone is welcome. Dr. Kaval Patel has only one request, “Respect the space. I see this as my home, and I don’t want anyone to abuse my home. If you respect a place, everything will be fine.”

“Our vision is to have a place where there is good food and good service in a space where all people from all backgrounds have a place to enjoy themselves.” 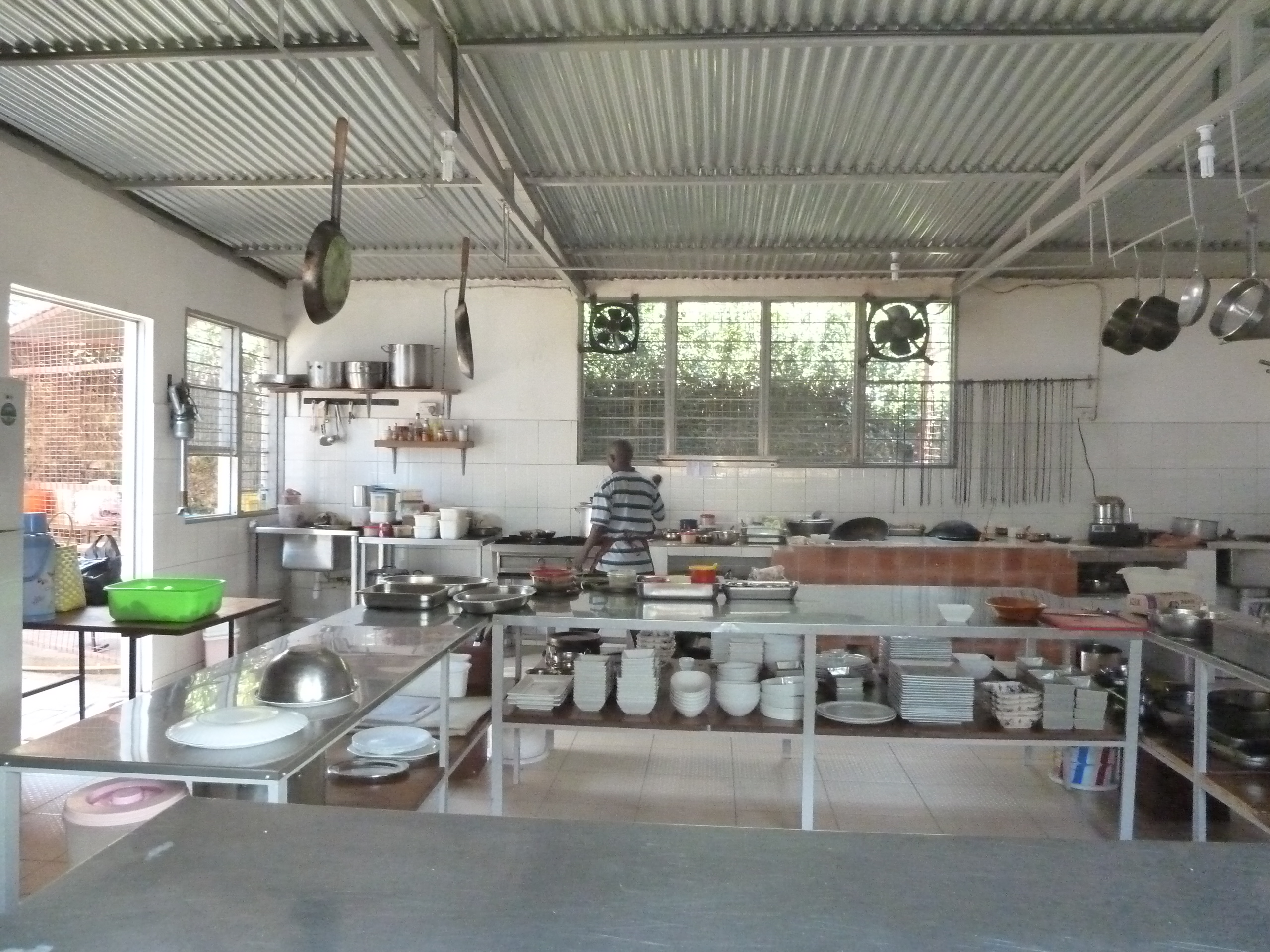 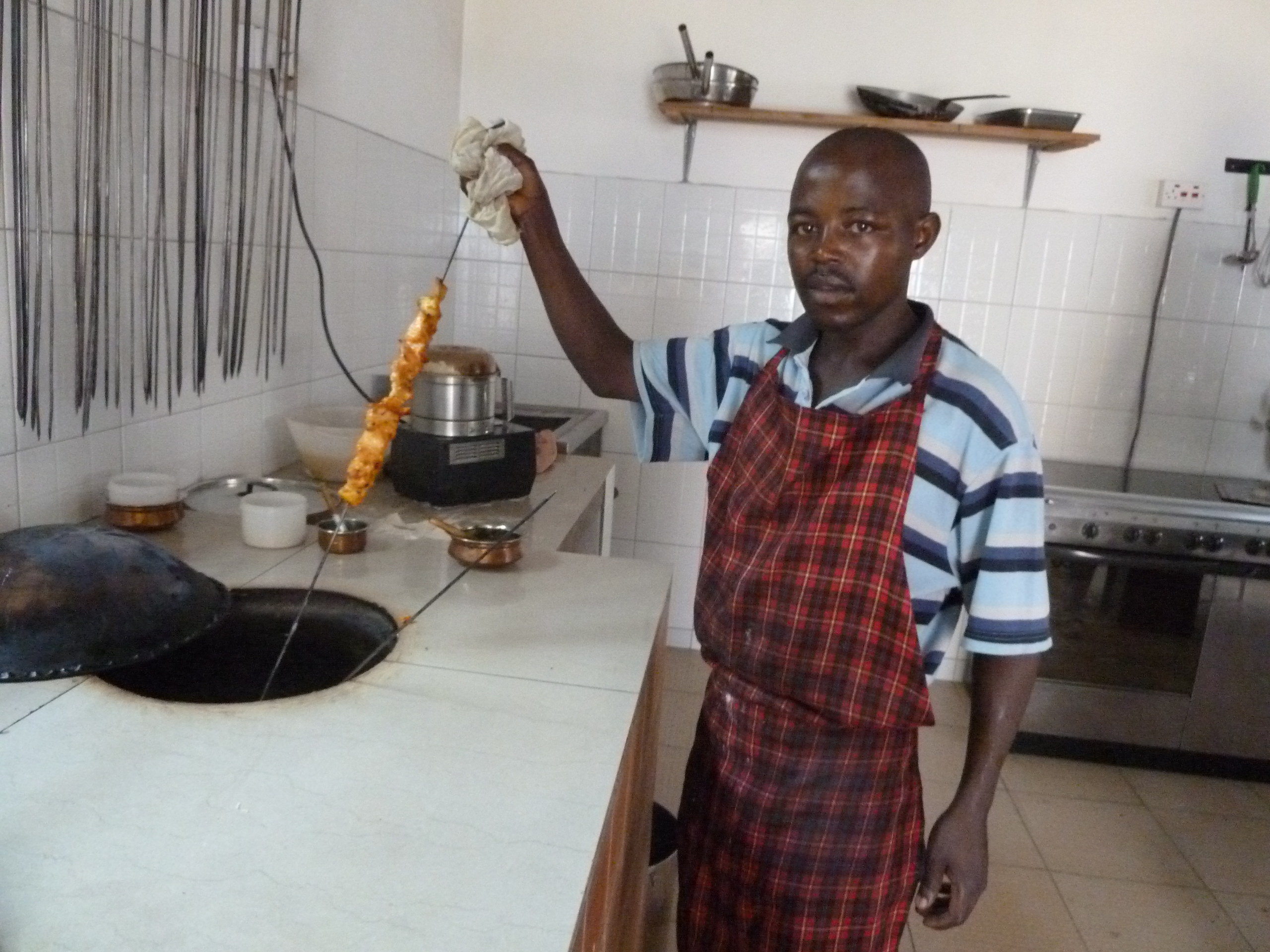 James the Tandoori chef holds up a fish tikka, straight out of the tandoor oven.
Kaval says, “We do a lot of barbecued food, but it is not spicy. I think there is a a misconception that all Indian Tandoori food is spicy. That is wrong. Our food is flavoured not spicy. Spicy to most people is hot, that is burning hot, flavoured is just aromatic. It induces other senses; smell, taste, feel and texture.” 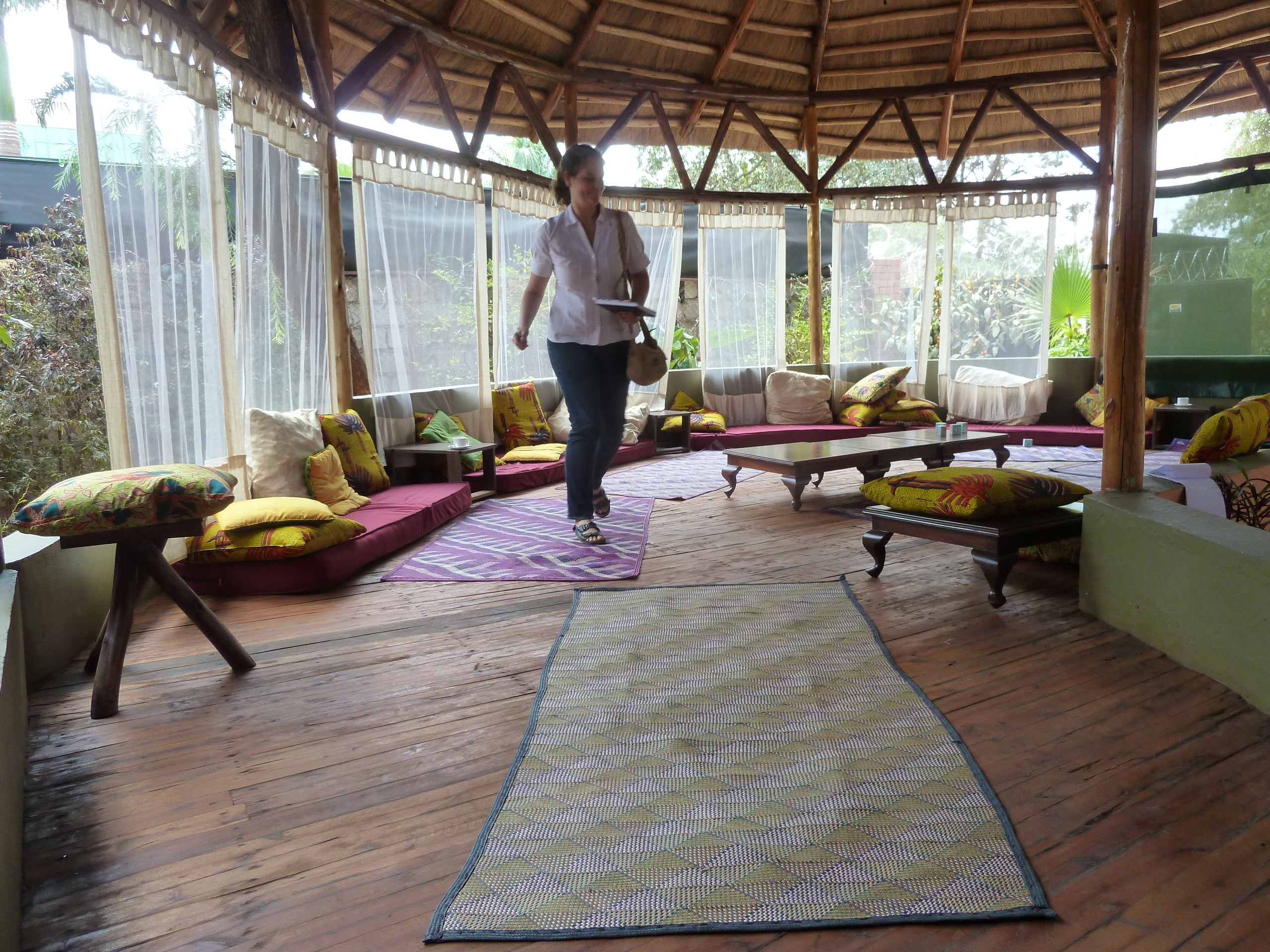 There are theme nights and every Thursday is Lady’s Night.
“Women are very important in society, but they are generally abused. As for me, my mum brought me up and the condition of women in Africa is not quite the same as that of women in western countries. So, we just wanted to have a bit of fun with that,” says Kaval, and adds “It’s free. It’s just a small token.”

“They need a bit of pampering,” says Kaval’s mum. “We need women to be stress free at least once a week.” 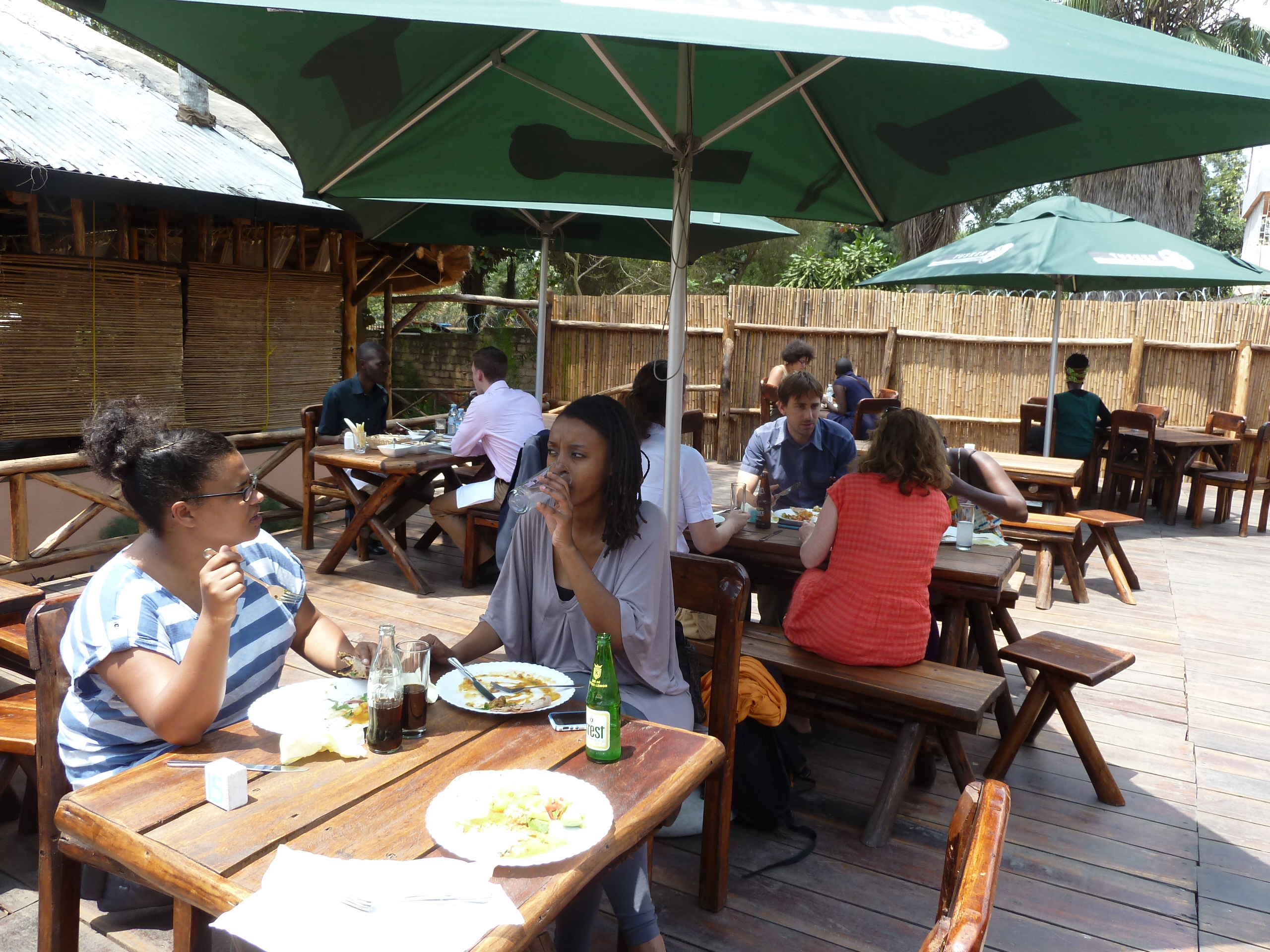 In light of ever shrinking number of public parks in Kampala, Kaval’s mum says, “There is need for places where people can inter mix. People from different backgrounds and cultures.”

“For example I’m a fourth generation member of my family, I grew up and went to different schools in the UK, and we have moved around so many times, so my friends are from everywhere. We should benefit from that friendship here as well. You learn a lot more that way.” says Kaval. 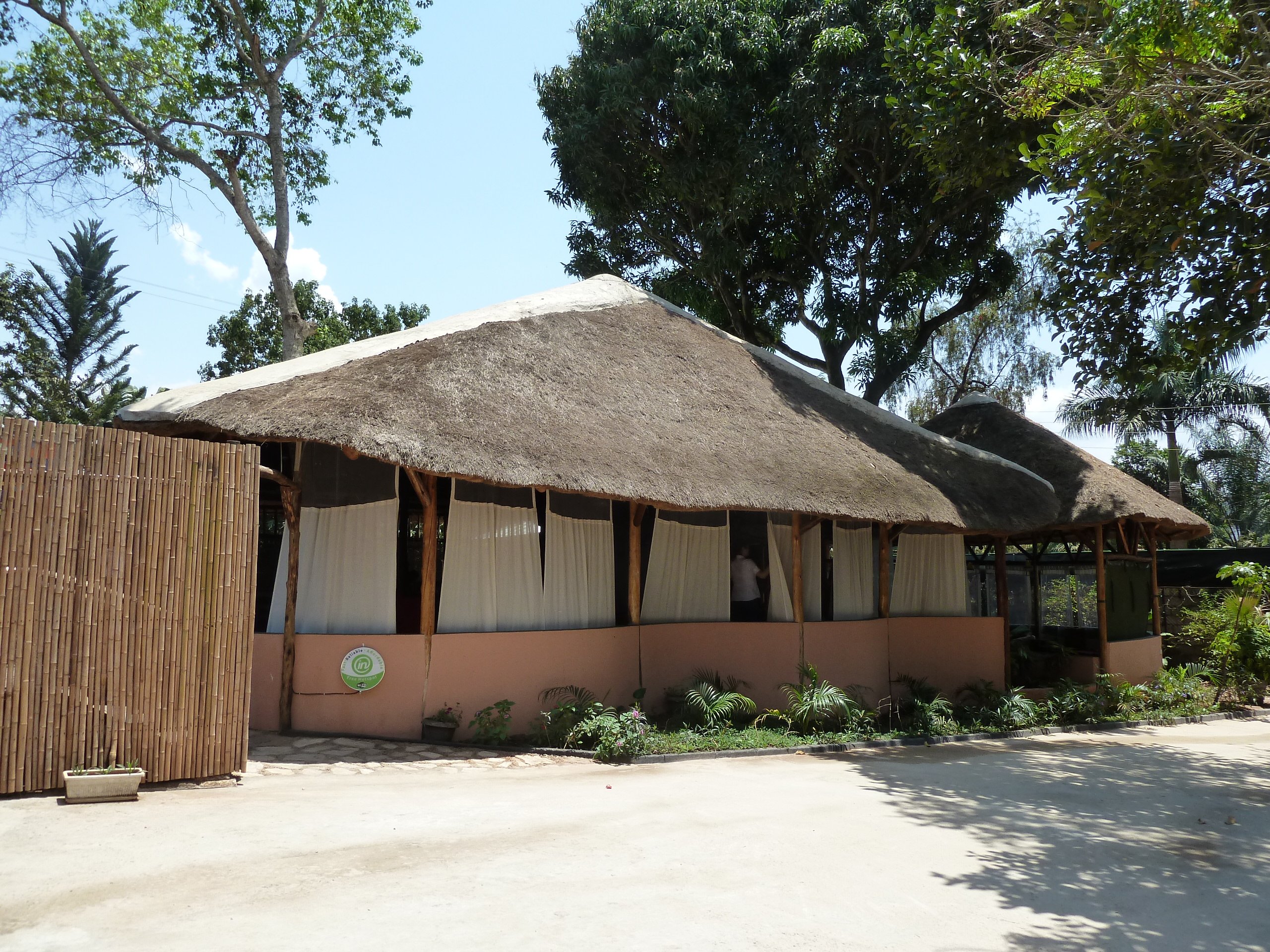 All the materials were sourced from markets around Kampala. Kaval’s mum says that the sofas were made about 60 or 70 years ago. They’ve just been reupholstered.

“I designed everything myself. This used to be a completely run down house,” says Kaval. He is very proud of the fact that, “Everything is hand made here by local artisans.” He says, “We maintain the use of local materials that’s why 98% of our materials are from Uganda, and most of them are recycled.” 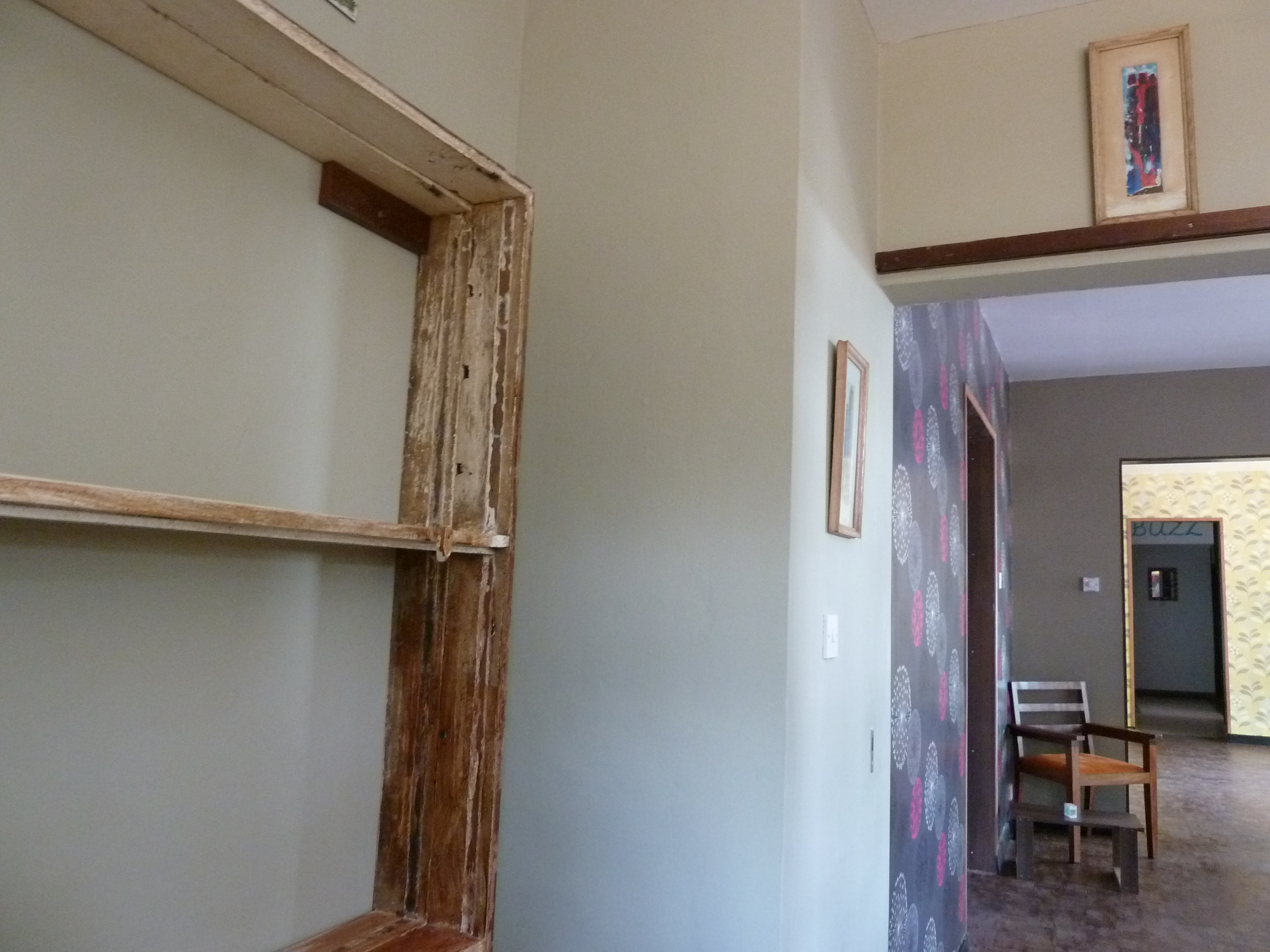 Old doors and windows were recycled into furniture and given a lick of paint while bright wallpaper was added to some walls to lend character and warmth. The screening work outside was done with bamboo from Namugongo. Kaval’s mum loves art so she commissioned a friend to paint the murals on the walls. 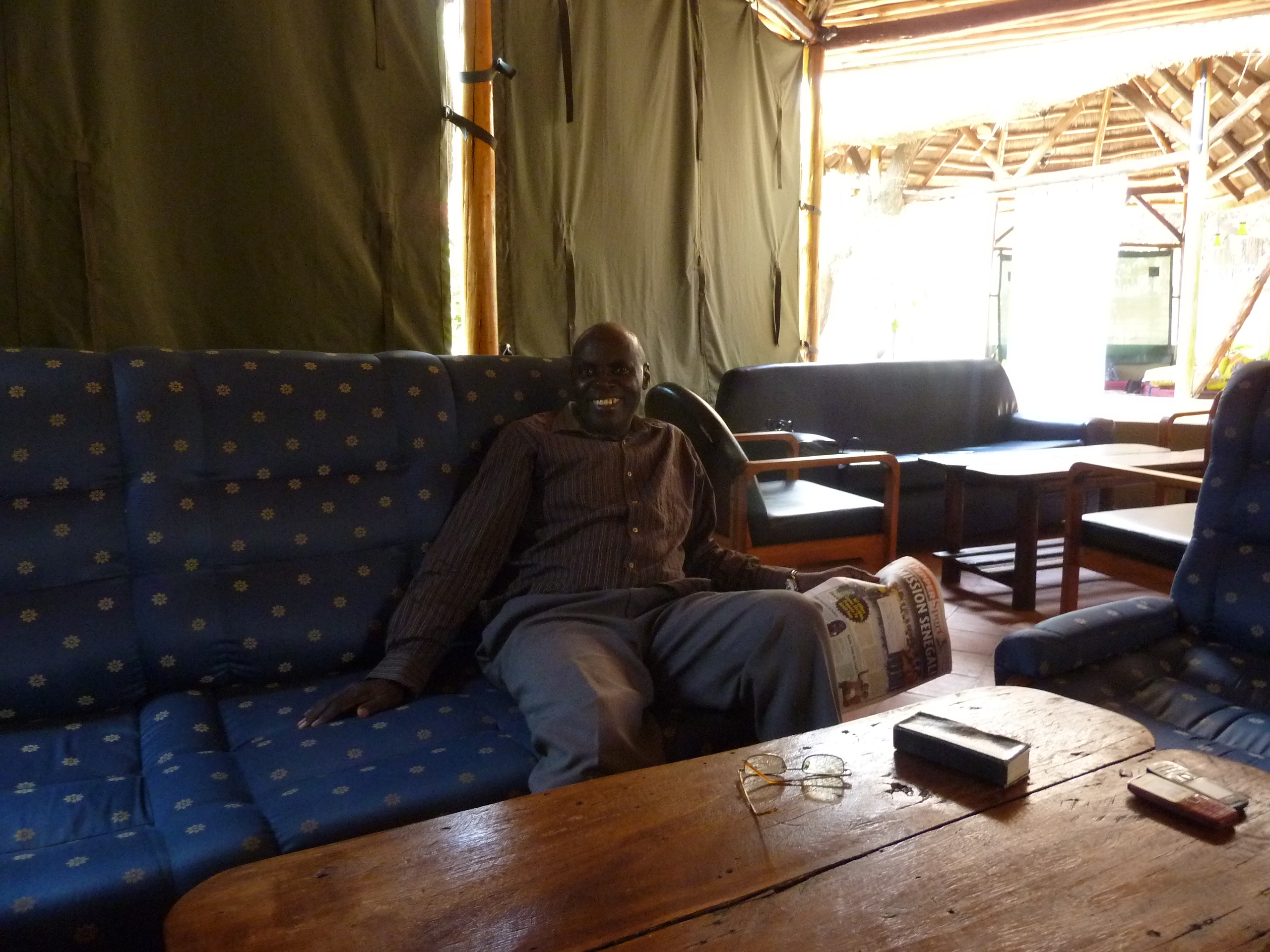 Prof. Murindwa-Rutanga, is a lecturer in the Department of Political Science at Makerere University’s School Of Social Science. He is the author of Politics, Religion and Power in the Great Lakes Region, published by CODESRIA and Fountain Publishers.
“This is a doctor of teeth,” he jokes of Kaval, “When he sees you playing with your teeth he says, ‘Leave my patients alone.’” Prof Murindwa-Rutanga says that he has been a client for the last 10 years.

Uganda is a bird watching hot spot. He advises Kaval, “If you want to attract birds. Put some seeds out, so that some people who have never seen birds can see them. You can create an environment which is like a forest in the city, but don’t bring lions.” 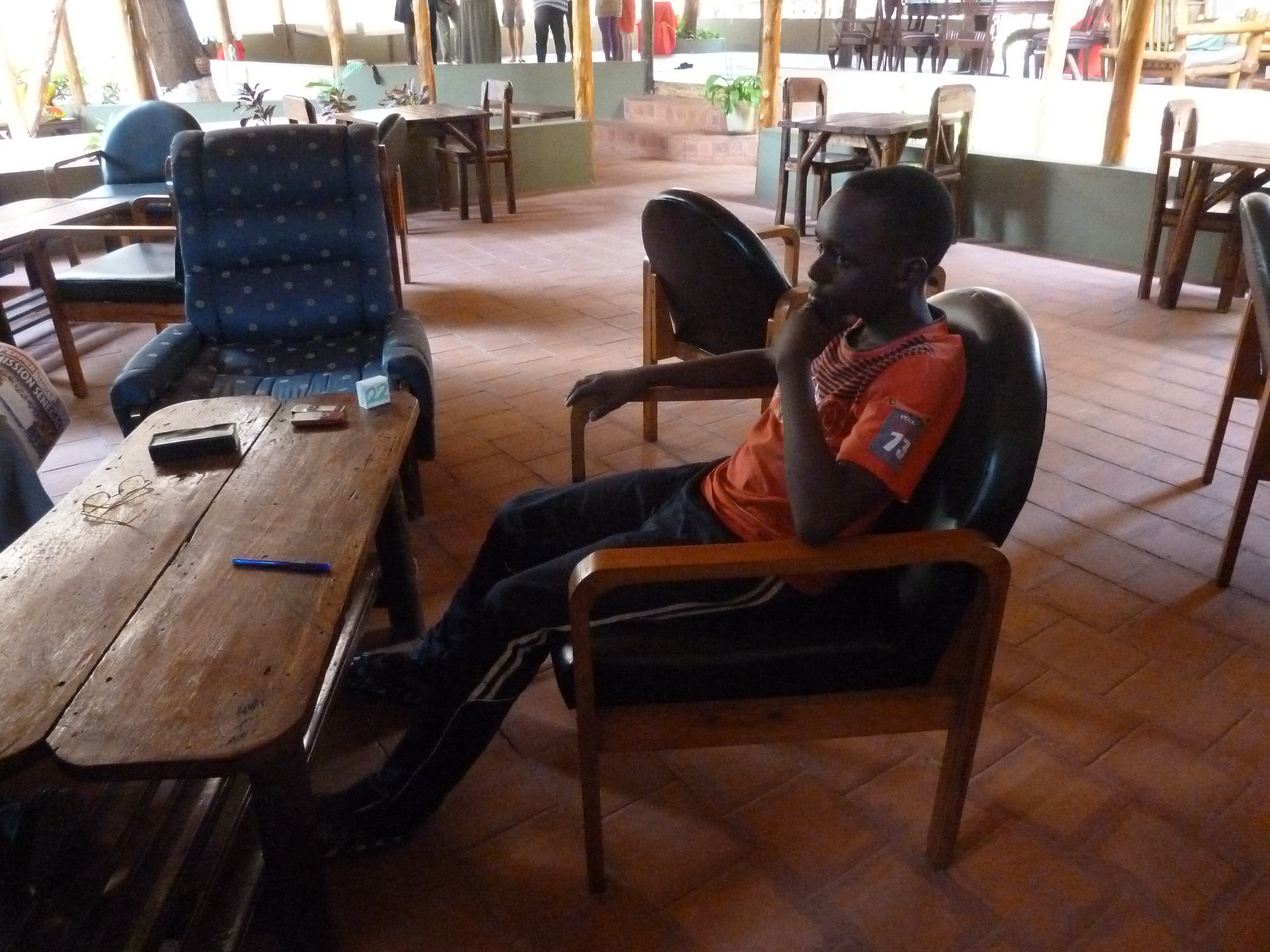 Murindwa had taken his young son Fanon out to lunch.  Fanon goes to Ntare School, where the pass mark is 55. They do not do final exams, instead they sit three exams per term the average of which is the final mark. Young Fanon is named after the philosopher Frantz Fanon. 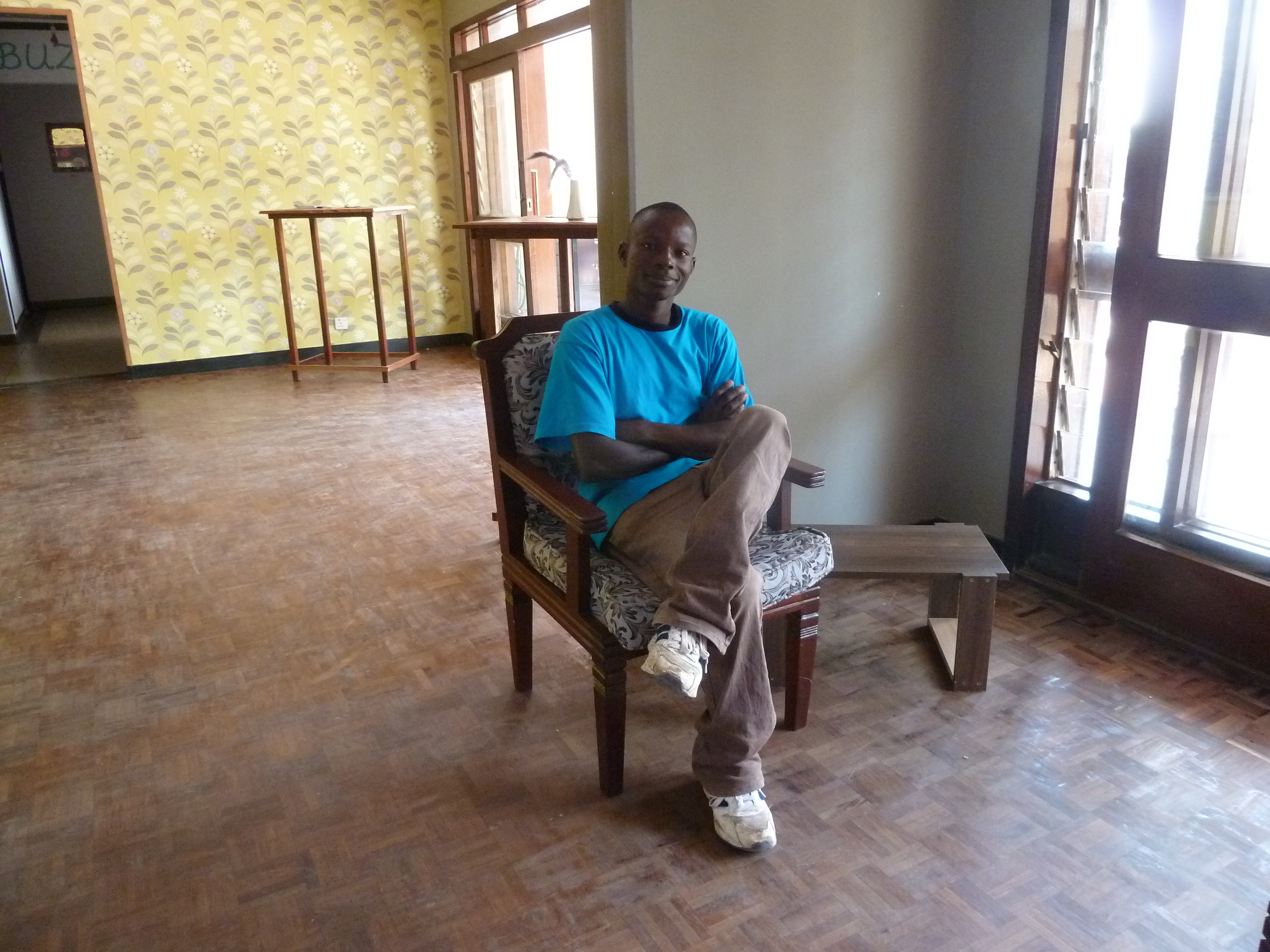 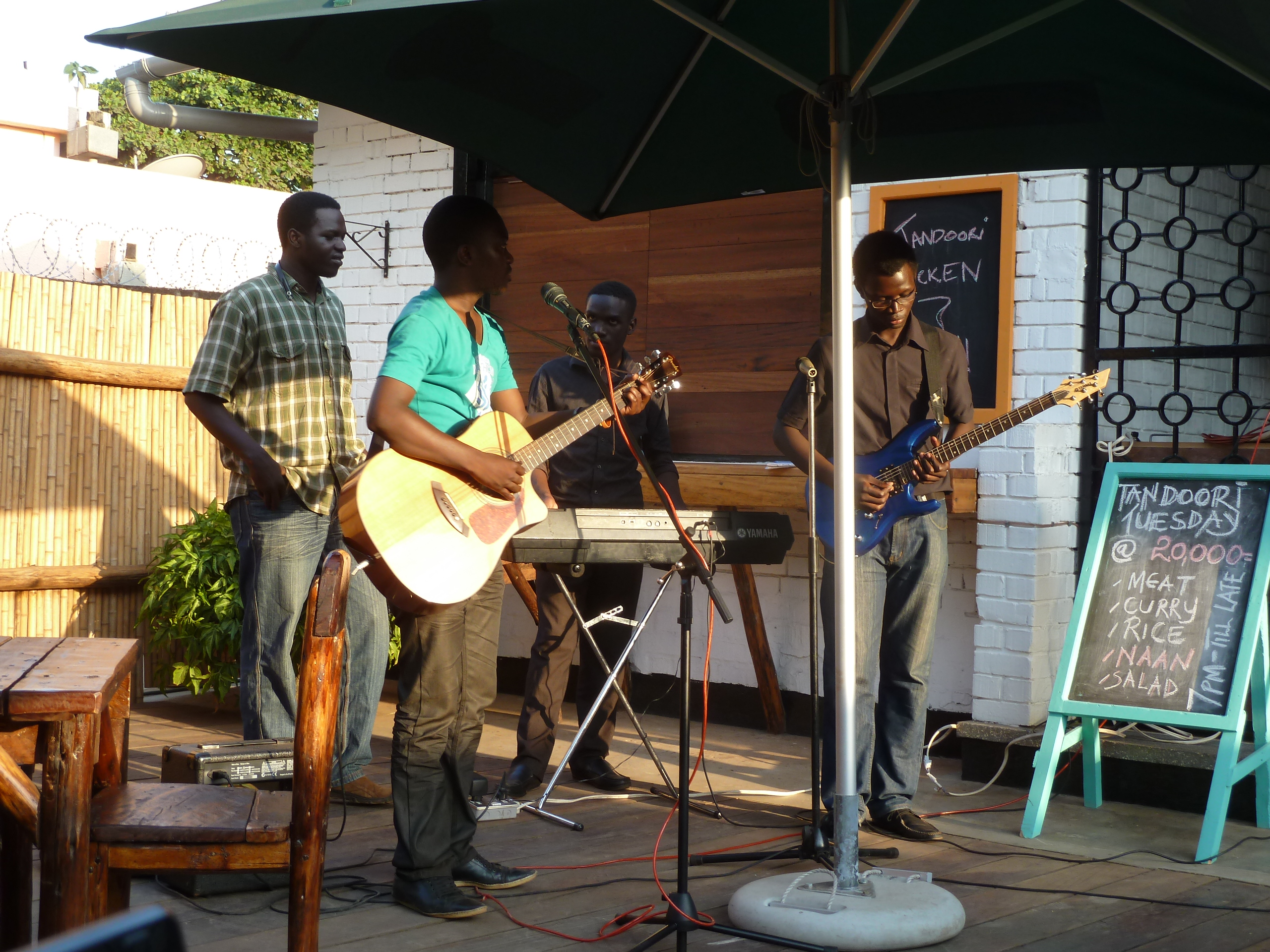 Buzz Band as the house band. 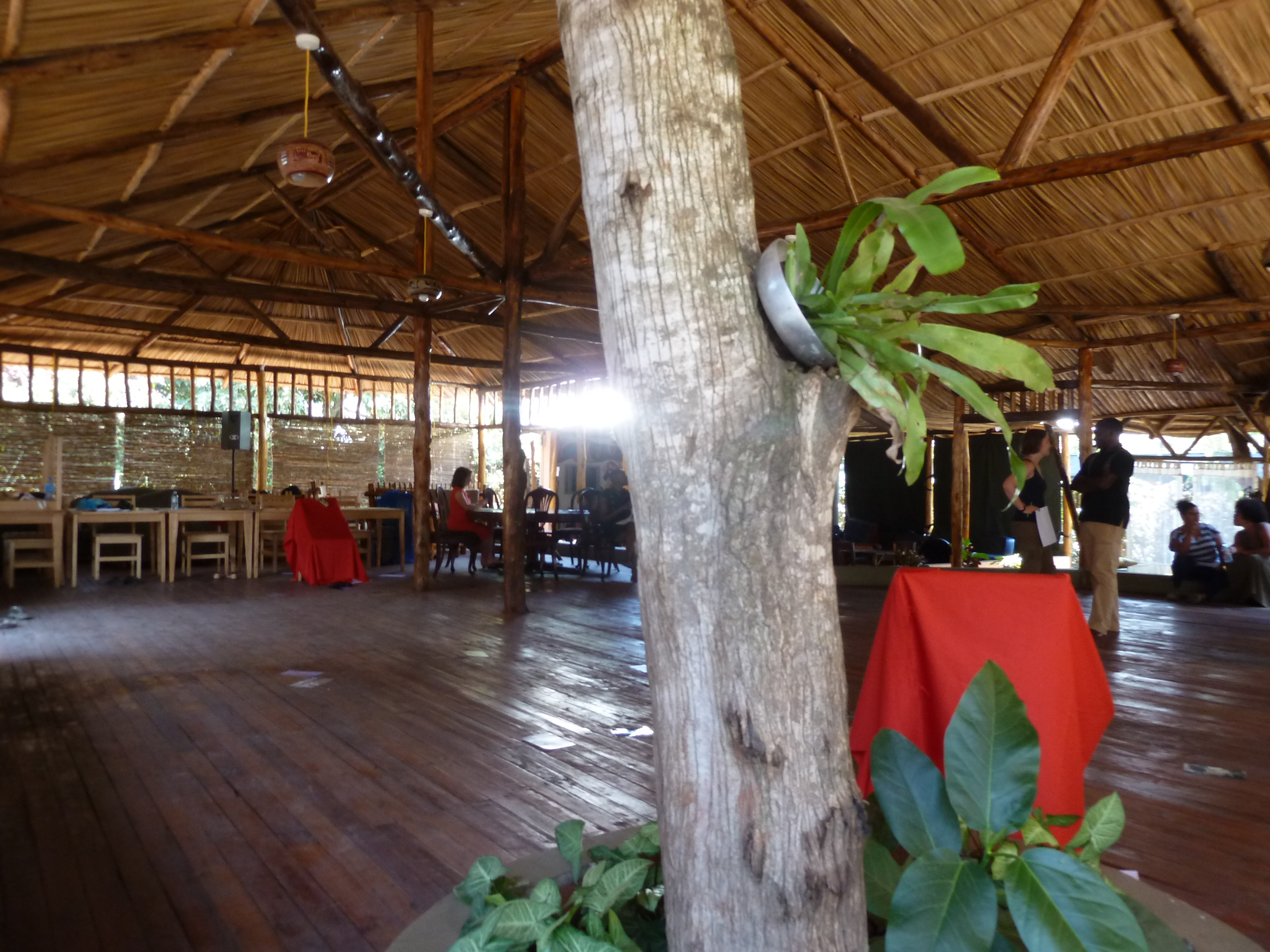 There is a fire place in the area that has looks like an informal office lounge, complete with sofas and settees. The terracota floor tiles are from Uganda Clays.

“We made this design because we had all this wood; one piece would be small another one would be big, so instead of throwing then away or burning, we decided to make this,” says Kaval’s mum.

The decking in the main space under a big grass thatched roof was made with eucaplyptus logs which had been sawed into planks and joined together. The rest of the flooring was done with rough hewn planks of wood. “We polished them using linseed oil.” says Kaval’s mum.

“This is my old frying pan. It has made food for so many years, maybe it can now rest and grow plants.” says Kaval’s mum. 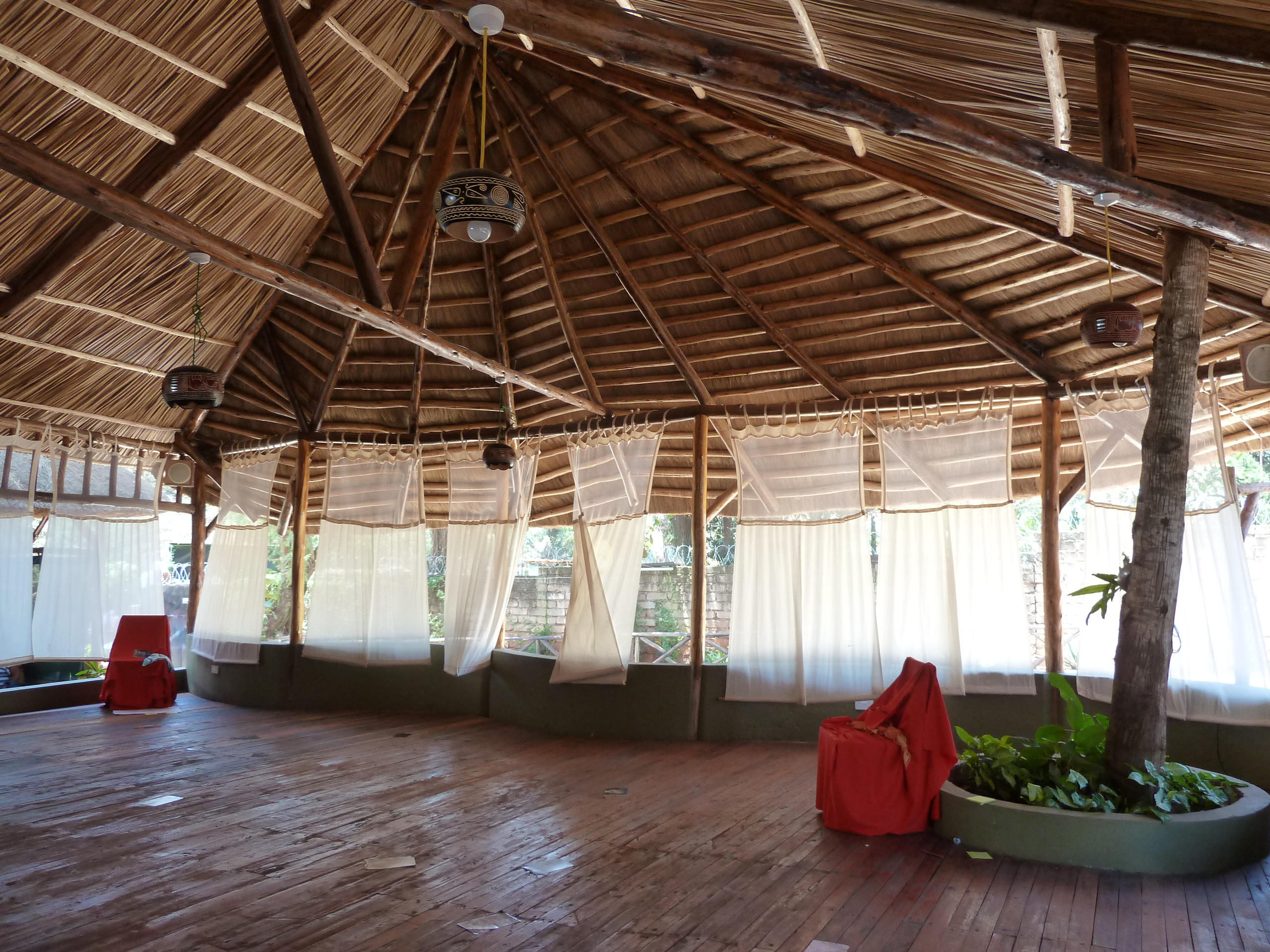 Kendu Hearth had a week long workshop which brought together Theatre Makers from East Africa, Europe and North America in September.

Kaval is optimistic that more people shall be interested in hiring the space for small functions. “Somebody might be interested in a small wedding or something. We still have more ideas. Hopefully we shall implement them within the next two months. We just want everyone to have a good time and to have fun,” says Kaval.

“It’s like a home away from home. It’s relaxed,” says Kaval’s mum, “A place for social interaction.”

Buzz Bar opened on 8th August. It is found on Bandali Rise, Bugolobi right next to Apple Bar. Up the slope from it is Ashiana, while Gatto Matto is down in the valley. Up until recently, most of these establishments were residential houses.

Homemade ice cream is soon to be made on site. Ms Patel, requested that no pictures be taken of her, so if you wish to see her and sample what her frying pans and cooking pots are sizzling with, go and visit her soon.

__
This is what Kendu Hearth was up to.