There once lived a man, his wife and their daughter. On the day of the girl’s birth, the man had planted a mulberry sapling in the centre of their homestead. He then made a will to his wife. He made her swear a solemn promise to marry off their daughter only in the same season that the tree produced its first fruits, if he was not alive at that time. Indeed, the man died before his daughter was of age and before the tree had produced its first fruits.

The tree grew tall as the years passed and its branches spread wide. It looked very beautiful, everyone who passed by admired it. Likewise, the girl grew into a beautiful maiden. She was deemed a true village beauty. One season came when the tree started budding, so the mother had to tell her daughter of her father’s will before he died.
“Your father requested that you be married off during the season when the tree in the centre of the homestead produces its first berries.” 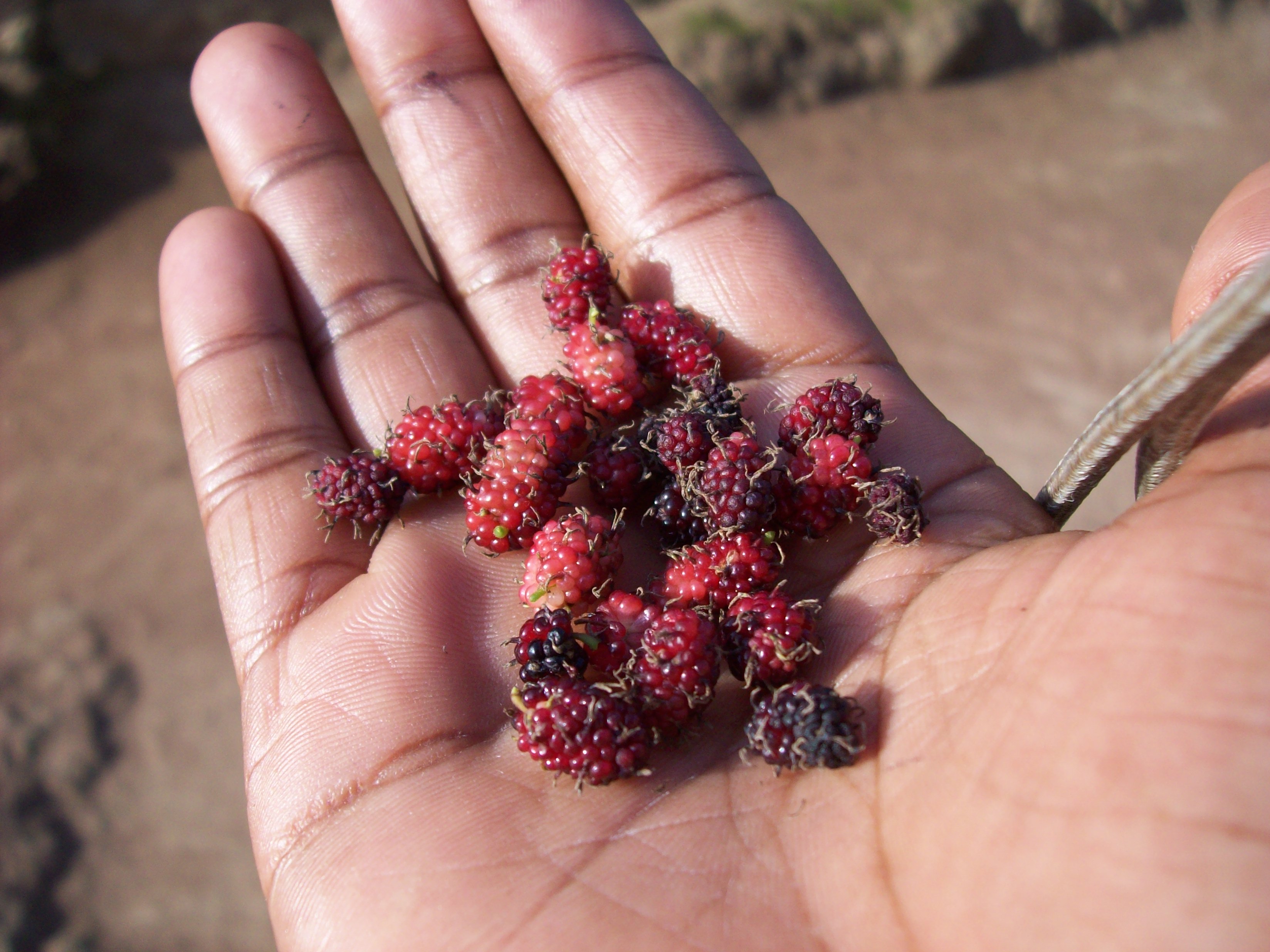 The girl accepted her father’s will but she added her own condition.
“I’ll only be taken by the man who will not eat the first fruits of the tree,” the girl said.

When the berries ripened into huge, dark red juicy fruit, all the interested men in the village were invited into the homestead to present their marriage proposals.

The village prince was the first to come. He was tall, dark and very handsome. When the girl saw him, she liked him immediately. She fetched a seat and placed it under the tree. When the prince took his seat, everybody present in the home greeted him. The girl then climbed up the tree and began to drop the succulent berries as she sang the following song;

The prince ate one berry, then another and ate some more until his tongue was painted deep red by the juice of the berries. This saddened the girl. When the visit was over she bade him farewell.

The following day the village lord came to present his marriage proposal. He was quite older than the girl and besides that he already had three wives. He owned a lot of land and cattle too. He was welcomed in the same way as the prince. After the girl put his seat under the tree, she climbed up into the tree and began to drop ripe berries as she sang;

The village lord ate a full gourd of berries and ordered some more to be packed for him. For he would take them to eat at his own home. After the village lord, there came a farmer. He had immense physical strength. He was renown for his ability to till the ground from sunrise to sunset and his muscles were big and shiny. However he owned no land. Therefore he would till other people’s land and they would in turn pay him in kind, usually by giving him a meal. And thus he usually had no food of his own. He had gone to bed hungry the previous night before he came to see the girl. Before they could greet him or give him a seat, he walked right up to the tree and reached for the low hanging red berries and gobbled them. The girl escorted the farmer away. When she returned, she found her mother crying.
“What is making you sad?” she said.
“I’m worried. I fear that no man can resist the berries and you, my only daughter, shall fail to be married,” said the mother.

As her mother was still crying, a leper arrived. The leprosy had eaten away at his fingers and toes, and he was also infested with jiggers. There were sores and blisters on his legs and arms, and scars in the spots where jiggers had been removed. His hair was grey and his back was bent with age. If he had been one of her own clansmen, she would have called her grandfather. But he was not, so he had the right to take her as his wife. The girl crossed her fingers at the sight of her suitor, in the hope that he would eat the berries. She walked over to him and helped him get to the tree because he could hardly walk. When the leper was seated, the girl wasted no time climbing up the tree and started shaking off the berries. She sang the song;

The leper did not eat any of the fallen berries. Thinking that he was a little bit deaf, she repeated the song in a much louder voice;

The girl sang until she was hoarse. She shook the branches with so much vigor that no single berry was left on the tree. The leper remained seated and did not move a single limb. He neither picked nor put anything in his mouth.

Her mother summoned her shortly. She reminded her to stay faithful to her word since the leper had passed the test. The girl had to be married to him. The mother gathered up all her daughter’s possessions in a bundle and gave her blessings. The girl and the leper left together. The girl could no longer hold back her tears as they walked away from home.

They walked until they came to the prince’s palace. As the leper led her to the prince, she respectfully kept her eyes to the ground. She waited for the leper to speak.

“Prince, I have done my part. I have brought you your bride. Please give me the prize you promised,” said the leper.

On hearing these words, the girl stole a glance at the prince. The possibility that the leper had only been a messenger relived her and renewed her joy.

“Since you have brought my bride, you shall have your ten cows. I always keep my word. Please go to the kraal and pick out the heads you want. They shall be yours,” the prince said.

The girl smiled and knelt down to thank the prince. The Prince took her aside and narrated to her how he had arranged it all. After realising that he had failed the test, he had called a village council to advice him. One of the elders advised him to offer a handsome reward to any man who could pass the test. Many candidates volunteered for the task but he chose the leper because he was in great need. Moreover he had declined to not eat the berries for no less than ten heads of cattle.

The prince then called a village meeting. And everyone came to witness the auspicious occasion of the marriage between the prince and the girl.

“May the sheep in my mother’s ancestral home fatten as I grow strong and healthy.”

6 thoughts on “The Ozilingiti Bride”