When a person dies, it is the duty of the aunt, or wayo to inform the family that death has occurred.  She stands outside and takes some thatching grass from the roof then fills a large calabash with clean water. If the deceased is male she removes three stalks of grass and if female she removes four. She lights the grass and makes broad circular movements over the awal filled with water. She does this three times for a male and four times for a female. A handful of water from the same awal is then used to put out the fire. 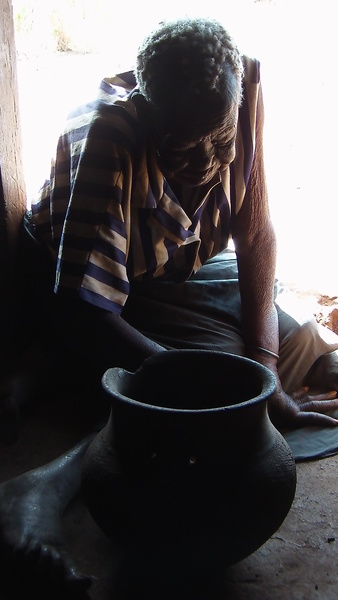 Rosalia and her son Opio’s pot.

The water in the awal is used only for the ritual cleansing of the deceased. The vessel and it’s contents are thrown away in bush as they are considered contaminated by death. Ritual washing takes place inside the house in which the deceased passed their final moments. Only clean water and a sponge is used, and the skin of the deceased is rubbed with shea butter and allowed to cool as the burial ground is prepared. This is a gesture of respect and shows the deceased that they are loved and cared for even at their most vulnerable. The elders say that it is abominable to enter the after life with any dirt on the body.

Twins and spirit children are considered special because they have been marked by the supernatural spirits or God. They are referred to as lutinu jok, meaning children of the spirits or Gods. It is very important to treat them with respect and accord them full burial rites or else their spirits may come back to take vengeance for maltreatment.

When a twin is buried, their body is carried to a temporary resting place near the family shrine known as Kac or Abila. These are the female and male shrines respectively. Friends and relatives mourn the deceased and dance to chase away the spirit of death which has struck the life out of the body of a loved one. Men perform a mock combat dance to evoke war with the spirit of death. This is accompanied by singing funeral songs and feasting in honour of the dead.

After the first funeral rites have been performed, the body of the deceased lies in the earth for months until the bones are ready to be unearthed.

The burial of children usually attracts less attention than that of elderly people. However it is also more solemn because the child has not had an opportunity to live a full life. That is to grow, to cultivate the land, to partake in celebrations, to marry and to bear children to expand the clan.

Burial rites are versatile and show diversity depending on the circumstances of the household. The first burial of a twin is complete when the deceased has been placed in a pot and the vessel sealed within the earth. Usually a tree or a clump of flowers is planted to mark the burial site. Unlike ordinary children born naturally, spirit children are given two burials. The first one is to anchor them to their ancestors and the second one is to free them so that they can be happy in the after life.

The last funeral rites are usually performed a year after the first burial. The people of the homestead wait for the mother of the child or a close female relative to dream. If in the dream the deceased complains about the earth being heavy, or makes any remark about the weight of soil by saying, “Ma, the earth presses me.” Then the family makes arrangements to free the deceased from the clutches of the earth.

Alternatively, if no dreams have been had, a family member may consult a diviner who contacts the spirit world. After a session of tyet, words of counsel are delivered. A date on which to perform the last funeral rites is then set by the family.

After the performance of the last rituals, the vessel containing the bones is unearthed and taken away from the homestead. These remains are carried to the olet or surrounding pasture land and left out in the open air. In certain clans, the remains of spirit children are left in forests, along river beds or on top of a raised land form. Once the remains have been placed in their final resting place, the pot with the eyes is returned home. 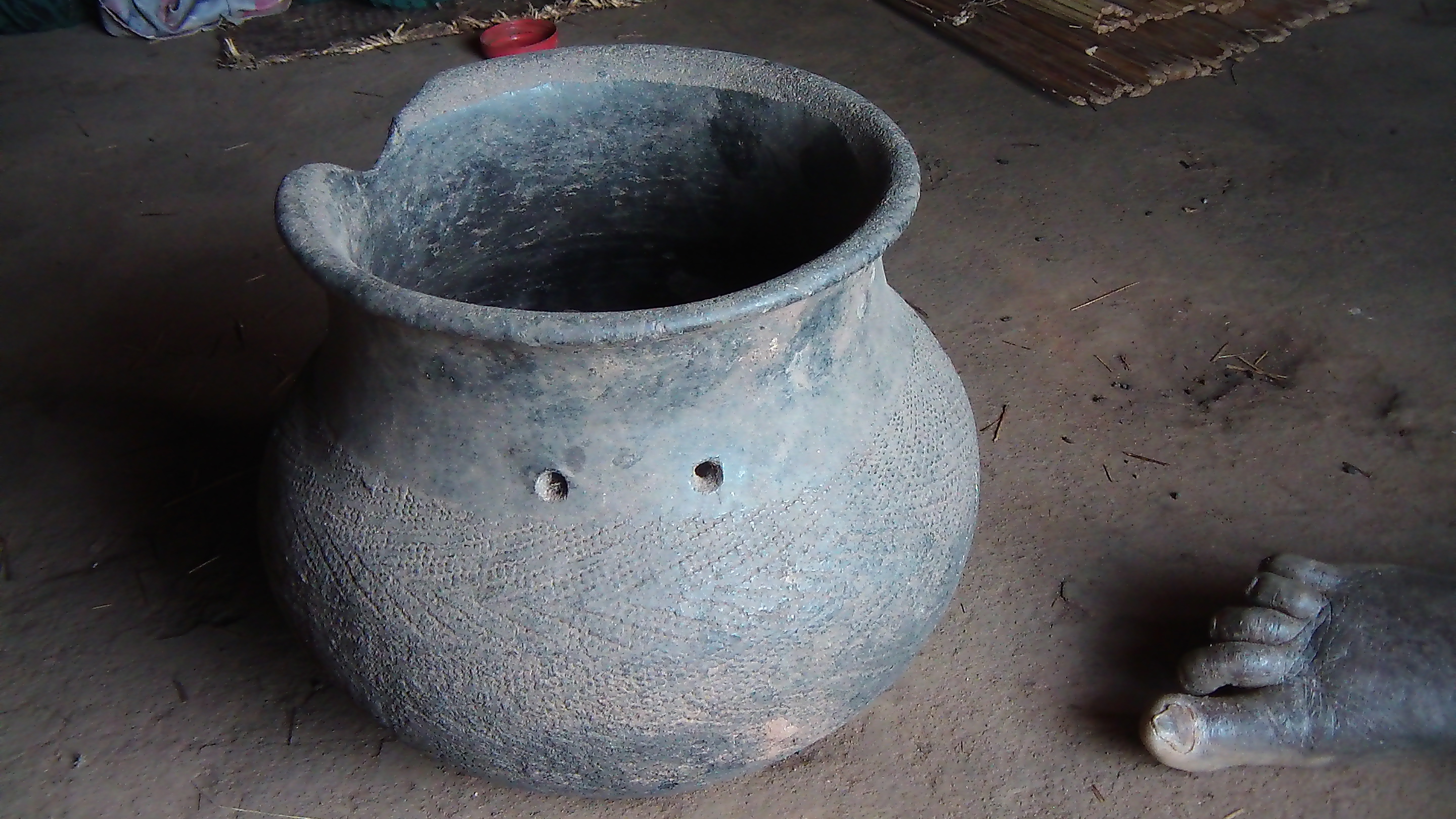 These pots are ornamented with two hollow spots which represent the eyes of the deceased. These eyes are conceptual, and symbolise the child’s eyes. “Spirits look at people through those eyes,” says Mr. Wokorach Walter, “It is important that the family performs all necessary preparations to make the spirit comfortable.”

When the physical body dies, the clay pot becomes a vessel to hold the spirit of the deceased until he or she is ready to leave the homestead. Even though the spirit is considered immortal at death, it’s in the family’s interest that their loved one has no fear of transitioning to an unfamiliar realm.

There is no distinction between a person and their spirit. But a spirit is not a person. It may display human traits like hunger and thirst, in which case they are given token food and libations to satiate their needs. The food is placed in the pot.

Since children are naturally attached to their mothers, at death, a spirit may be afraid to part from it’s mother. In such a state, they may cause problems when they become trapped between the world of the living and that of the dead.

A happy spirit leaves in peace. But an aggrieved spirit may disturb the living during a fit of spirit possession, haunt a place or cause malicious damage to property. A state of contentment can only be guaranteed if the deceased has been accorded proper funeral rites stipulated under customary laws known as Chik Acholi. 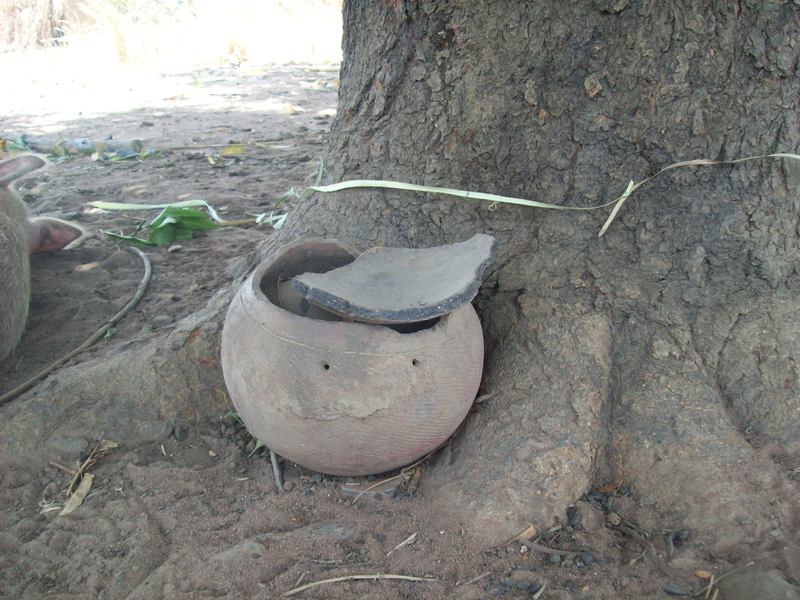 Empty agulu jok and fragments from another pot. Courtesy of the family of Okumu Secondo. Paduny-Paromo village. Awach Sub County

The lower sections of these funerary pots are usually decorated in an embossed weavework patten. This is produced by hand using woven palm leaves. The vessel is shaped like an ordinary cooking pot, but when light filters in through the two little holes, it creates a striking image.

Once the mourning period has ended, the pot may have utilitarian functions. Ms Rosalia Auma says her Opio has left so she uses the pot to store her condiments. In confirming the practical nature of ritual ornaments she says, “I keep my salt in there.”

___
Pictures and stories reproduced with permission of Wokorach Walter and Rosalia Auma of Paibona Te Tugu. They are musicians.