The 2014 Storymoja Festival took place from September 17th – 21st at the Nairobi National Museum. One of the special highlights of the festivities was the presence of Professor Wole Soyinka. The Nobel Laureate delivered the Wangari Maathai memorial lecture to a full house. He also honoured the late Professor Kofi Awoonor who perished in the 2013 Westgate Mall attack. 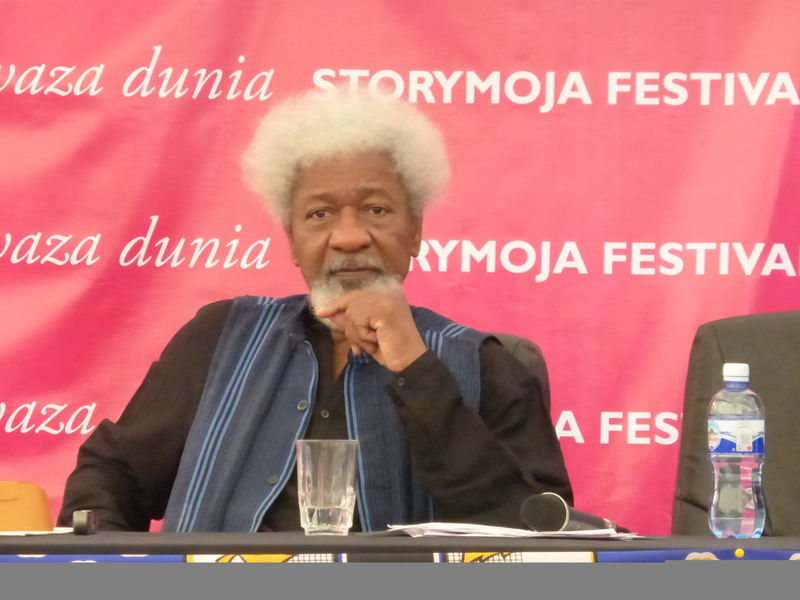 The lecture was mainly about trees and their place in our lives. Beyond the collective recognition of the importance of trees, the audience was asked to consider the concept of a family tree in a globalised village.

Soyinka’s anecdotes about trees were punctuated with calls to conserve biodiversity. He decried religious fundamentalism and unchecked neo-liberalism. Even esoteric knowledge concerning sacred trees like the Iroko and silk cotton were reminders to preserve enriching traditions. He quoted lines from a poem by Jeremy Cronym,

To live close to every tree you had ever planted
Our century has been the great destructor of that,
The small and continuous community, lived in solidarity
With seasons, its life eked out around
Your fore-mothers’ and -fathers’ burial-ground.

He continued to say that the destruction of the environment bears an unmistakable correlation to gross human rights abuses.

In the spirit of Ms Wangari Maathai, Soyinka invoked solidarity for one another bolstered by an enlightened education to help us better understand what is at stake. Maathai says in her biography: “Education, if it means anything, should not take people away from land, but instill in them even more, respect for it, because educated people are in a position to understand what is being lost. The future of the planet concerns all of us, and we should do what we can to protect it.”

In most disenfranchised communities, struggles for justice, and by extension human dignity, are invariably linked to access to land and the rights that accrue from having security of tenure. But powerful speculators can, and do, stake claims contrary to the will of the majority as, “They bulldoze humanity in the name of an illusory land development – clearing the ground for a vaporous Paradise.”

On the death of Professor Kofi Awoonor, Elder, poet and intellectual, mourners said, “A mighty tree has fallen”.

Billie Holliday’s Strange Fruit bears strong imagery on the inhumanity of racism. In Toni Morsion’s Beloved, the protagonist Sethe owns her suffering by reimagining the weals on her back as a tree. Her reason is, “I carry a permanent reminder of my status as a being born without a voice, without volition. It is a disfigurement, not merely of the body but of the spirit, one that reminds us of what it is like to be born into that sole destiny – no different from a tree, open to being scarred, abused, amputated and cut down at will, just one among other owned utilities.”

Religious fundamentalism is on the rise all over Africa. Boko Haram, Al Shabaab and similar outfits have spawned fear and horror in communities. Soyinka calls all the war weary to robustly protect our liberty. In an open ended appeal he says, “Yes, perhaps it is high time we declare ourselves fundamentalists of human liberty. Not libertinism but simply – liberty. Freedom. Either this is what we fought for on this continent – against foreign invaders, against enslavement, against imperialism – or else we have fooled ourselves. We have fought merely to hand over the millennial keys on our chains to a new set of imperators.”

The Dome was filled with hundreds of people, many of who spilled out of the white marquee, onto adjacent lawns. Whereas adults listened intently, some of the bored schoolchildren played games on their smart phones and took selfies.

___
The full text of the lecture is available as Parables-from-Wangari-Maathais-Trees-Professor-Wole-Soyinkas-Lecture-at-Storymoja-Festival-2014.

One thought on “Wangari Maathai’s Trees”