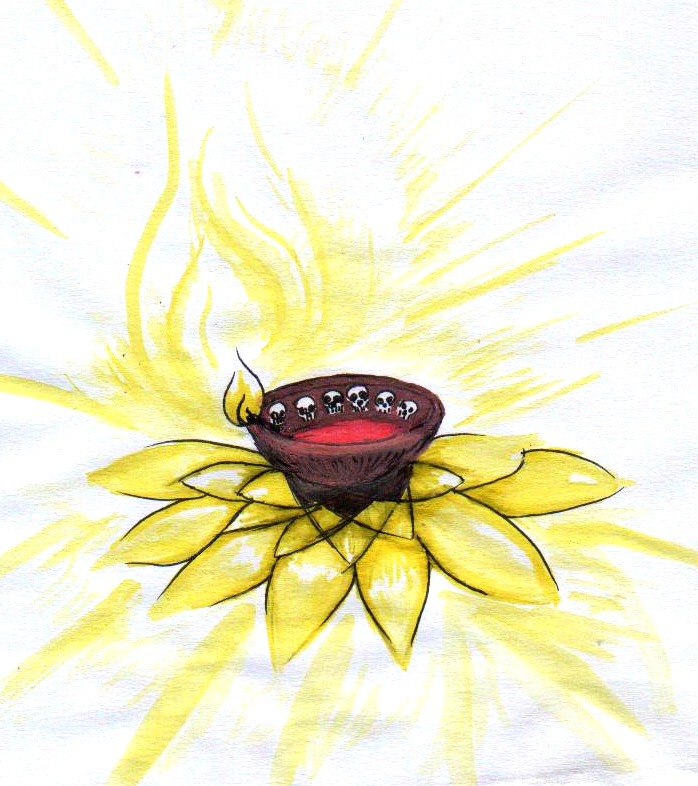 Sunitha’s family was away for the movies. She treasured these relaxing moments. Lighting the lamp in her living room temple, she bowed her head in earnest.

“Please keep my family safe and healthy,” she prayed.

She drew a sandalwood tilaka on her forehead and offered flowers to her Gods. The scent of jasmine and sandalwood permeated the air.

A moment later, she lay on the velvet sofa until it warmed under her. Her bare shins shone as silver anklets tinkled around them. Her deft toes felt around for the knob of the light switch, then adjusted it to a dim glow.

She raised her head and swiped the phone’s screen. It was her brother.

After the call, she threw her head backwards and slumped against the cushions. Her mind blanked for a whole three minutes.

She slammed down her phone in anger. It bounced on the thick plush of the carpet and lay still.

“No! No!” screamed Sunitha, “Why did you snatch my mother away from me? I told you to take that granny instead! She seems to be living forever.”

She clenched her fists and brought them down hard on her lap. As anger burned through her large frame, it ate away at her sorrow. Voices in her head clanked above the sound of the gold bangles on her wrists. It seemed the God of Death was dancing in her mind.

“I won this time!” the God of Death said.

Whenever the God of Death visited Sunitha, she felt depressed. At the point of paranoia her psychiatrist would give her pills. Now the God of Death was insinuated taking of people close to her heart. Sometimes it was her husband or her son. Other times it would be her sister or her brother’s wife. Sunitha rejected his suggestions and proposed names of other distant relatives who would be better targets.

“Perhaps take that crippled cousin, Tara. Her life is a living hell anyways. She’s just a burden to others.”

“I think it is time for your dad to go though,” said the God of Death in an authoritative tone.

“No!” Sunitha said, disgusted. “Please, spare him for another ten years.”

To Sunita, the God of Death was in her thrall and she could protect whoever she pleased. He snatched life out of the people she recommended. As news of deceased relatives came to her, she sighed with satisfaction. In her mind, she could sense her family’s untimely deaths and warn them.

It had happened six times.

“I’m gonna take someone really close to you!” The God of death taunted, and went quiet.

In the evening, she confronted the God of Death again.

“Why? Why mama?” Sunitha asked in a loud, stern voice.

The God of Death remained silent.

Sunitha thought of her mother’s kind brown eyes framed in a head of silver hair. She had been ill for two months, and everyone expected her death at any moment now, except Sunitha. She believed the God of Death would obey her and not take her mother’s life.

As Sunitha’s restlessness grew, she rushed to the medicine cupboard. A bold pattern of painted flowers held her attention, and as she stared at them, she fumbled with the door until it sprung open.

“These should be enough,” she muttered as she lined up the white pills on the table.

“It’s my turn to play games with you,” Sunitha said.

She popped four of the 100mg Quitipin tablets into her mouth, and gulped down a mouthful of water. She knew that anything above 300mg would be lethal.

“You think you own death?” Sunitha said, thinking of her diagnosis. Bipolar. “You wait and see, I’ll control my own death.”

She ambled towards the sofa whispering, “Mama, Mama, Mama.” Soon she was floating in the blue sky and jumping from cloud to cloud. Her destination would be the Land of the Dead.

Sunitha landed in a majestic garden where a pink carpet of grass invited her. But something caught her hand and steadied her landing.

“Are you OK?” asked a husky, kind voice.

Sunitha looked around her but no one was there. Eventually she realized that it was a gigantic, golden flower that had spoken. She was intrigued by the sight of a walking and talking flower. Around her were tons and tons of flowers. Many were much bigger than the jasmine flowers she offered at prayers. She inhaled the air, yet caught no familiar scents.

“What happened my dear, what troubles you?” asked the flower.

“Where’s the God of Death?”

“I am the God of Death,” the flower said. His voice was kind, “Welcome to the land of Death.”

“God of Death?” she said shaking her head.

The flower told her of all the times he had snatched death just as she had suggested. Then she remembered her revenge, and had to suppress the anger that was flaring up inside her. She realized that she was there, because she had embraced death.

“Where is my mother? I have come to be with her,” Sunitha said.

“Sorry, but she has already returned to earth,” the God of Death replied.

Why was this flower playing such a joke? Had she been hallucinating? Why did her brother lie to her? Was this flower trying to scare her? Where was her mother?

Sunitha felt dizzy and the flower helped her sit down.

“How’s that possible? She just died…”

“Yes, that’s true. But now she’s gone back for rebirth. As for you, it wasn’t your time yet,” the God of Death sighed, then continued, “You forced yourself here.”

Sunitha thought of her husband and her children. She clutched her body and bent over. Why had she forsaken them for her mother?

“My children!” Sunitha howled at these unbearable death games. She could not take any more.

The flower stroked Sunitha’s head and she lay still among the pink blades of grass. Peaceful.

“My child, your time has not yet come,” said the God of Death. “You must go back to your family, they need you.”

Sima Mittal lives in Tanzania. Her profile can be viewed here.